Nicolae Testemitanu State University of Medicine and Pharmacy of the Republic of Moldova ranks 1st nationally, 307th among universities in Central and Eastern Europe, 1195th on the continent and 3975th in the world.

According to a report published by the Ranking Web of Universities (Webometrics) at the end of July 2022, the University climbed 2695 positions in the ranking of institutions present online globally and surpassed 562 institutions on the European continent, outranking the Technical University of Moldova (UTM) and the State University of Moldova (USM), as compared to January 2022. It should be mentioned that, for several years in a row, Nicolae Testemitanu University has maintained its third position among the local higher education establishments.

Our university registered an increase in the number of citations in Google Scholar, from 20,651 citations (January 2022) to 25,573 (July 2022), thus maintaining the first position as regards Transparency (Openness) at national level (https://www.webometrics.info/en/transparent).

Moreover, Nicolae Testemitanu University ranks first at Excellence indicator among the 25 local higher education institutions included in the international Webometrics list. In particular, it should be emphasized the fact that our university managed to advance, in the last six months, by 3112 positions as regards Excellence indicator worldwide.

Established in 2004 by the Cybermetrics Lab from Spain (Spanish National Research Council, CSIC), Webometrics is a classification system for universities around the world, which aims to motivate both institutions and researchers. The main objective of the Webometrics ranking is to promote Open Access to university-generated knowledge. The best strategy to improve your ranking is to increase the quantity and quality of your web content.

The Web of Universities Ranking is published twice a year and analyzes over 31 thousand higher education institutions from over 200 countries, according to a series of indicators:

10% – Transparency (or Openness) – the total number of citations of university researchers that are found in the top 210 author profiles, excluding the first 20 (Google Scholar Profiles);

40% – Excellence – the quality of scientific articles published in high-impact international journals, in the top 10% most cited in 27 disciplines, the period taken into account – 2017-2021 (Scimago).

Nicolae Testemitanu State University of Medicine and Pharmacy also holds the first place in the ranking of the country’s institutional repositories according to RANKING WEB OF REPOSITORIES - TRANSPARENT RANKING: Institutional Repositories by Google Scholar, climbing up to the first position (June 2022) from the second (January 2022). Nicolae Testemitanu University Institutional Repository represents the digital university heritage of didactic, scientific publications and other types of documents and includes 12,700 GS records, followed by the UTM Institutional Repository with 12,600 GS records. The purpose of this ranking is to support Open Access initiatives and thus ensure free access to scientific publications. Web indicators are used to measure the global visibility and impact of scientific repositories. 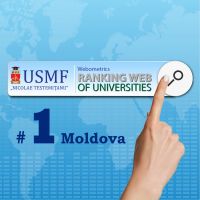 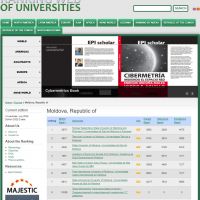